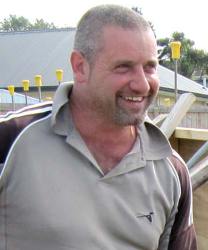 I know that Jason lived with Arthur [his father] in Waimate and attended his funeral along with his brother or half brother as ———– (my husband) went with them.  After he died Jason purchased his father’s Smith St home in 2005.

><
Jason worked in forestry first and set the standard, he was such a hard worker that no one could come close to what he could do in a day.  After that he drove the Waimate rubbish truck and like everything for him,  that was also a piece of cake and he put everything he had into it.  He also worked for Smiths in Timaru driving a digger which was his passion, he would be miles ahead of what anyone else would do and they had trouble keeping up with him.  After that he decided to work closer to home and went to Leethwick’s driving a digger. He was offered a brand new one but Jase being Jase said he didn’t want a new one, what he had was perfectly fine and he would stay on that.  ———- knows what he did between the rubbish truck and Smiths but  I’m not sure.
><
When we built our house Jason came up and cut down the retaining walls, then leveled the dirt for the lawn later.  If he didn’t get it finished that day he would say, ‘don’t worry I’ll be back tomorrow’.  He would sit on the digger all day and refuse to stop and eat lunch or have a break and when it broke he would calmly sort out how to fix it and sort it out without a fuss.
><
He carried a photo of his son ——— in his wallet; when he was up this way he would stop in but after a while would say he had to get going because the wee fella would be awake soon and he wanted to go and visit him.  Jason was so proud but as time went on he saw less and less of his son with his ex partner making excuses. But he would always say calmly with never a bad word, ‘that’s how she wants it then I can’t do anything about it. No point causing trouble and she just makes it harder for me’.  His ex said she [was] allergic to Latex, while they were together she became very moody and difficult so Jase decided to end it later finding out that she was pregnant but I think they had burned their bridges by then and she had decided to make it very hard for Jase to be part of his son’s life.  Jason saw him when he could and was always talking about new things he was looking to buy for him for birthdays and at Christmas time.  It was very sad, he just wanted to be a good dad to his son and not miss out.
><
He was an incredible guy with the kindest heart, respect for everyone and was so much more talented than he would ever give himself credit for.  We’re so extremely gutted we know what we [would] do now and think there are so many things we could have said and done to at least try and help him through his dark patch. I’m sure just knowing there were people that really loved and cared about him, that he could rely on to talk to about absolutely anything without feeling ashamed or embarrassed, and to help, may have stopped him from ever getting to the point he did.  We both agreed today if he was still alive now after what happened we would both still be here for him because the real Jase was just lonely, very troubled and dying for someone to help him with the issues he carried around for so long.
><
He should have been given help when he was in prison in 2001, he admitted then he was crying out for someone to help him and it went completely ignored.  We never asked exactly what happened and I don’t know if anyone ever did; we thought we would be prying and it was just a minor offence until they plastered it all through the newspaper, internet and television recently last month.  It was a secret until it was too late.  I’m angry about the stupid way that makes no sense, it’s too late now so people don’t need to know things with some of it being fabricated anyway.  Your life’s only private until you’re dead and it’s too late.
><
Something that I’ve never forgotten is how every time he was here he would put his hand on the window to leave a hand print in the kitchen or dining room and jokingly say, ‘that’s in case I ever go missing, people will know I was here’. Was that his way of asking for help?
><
I just want to know that he has been put to rest with the respect he still deserved and if it is somewhere public [to enable us to go] and make peace, and to know he is somewhere safe.  It looks as though someone has started or may have finished clearing his house out but apart from that I have nothing.  If you do ever find or hear from anyone can you please let me know or pass on my details so they can contact me; I would be eternally grateful. I really can’t let this go until I know, he meant too much to me to just let it slide.
><
Thank you very much, I’m glad I found your blog and was able to talk to you. x
A friend of Jason’s
><
Jason Frandi – A Victim Too?

I strongly encourage all my friends who have children with iPhones to download the $0.99 Daniel Morcombe Foundation App. Our children can push a panic button which instantaneously makes the phone emit a siren, and two nominated recipients will receive an SOS message with a map which pinpoints the exact location of your child’s phone. Money well spent!!

(Thank you Natalie Maxted for posting this on Facebook)

Not DANIEL, ZAHRA or CAYLEE…

Poem  No Summer Will They See – Not Daniel, Zahra or Caylee

Read my Poem *No Summer Will They See – Not Daniel, Zahra or Caylee*

here in DRAGONS DESERTS and DREAMS

Dedicated to lost children everywhere, and In memory of: