Please let’s stop this burning of books now, regardless of who is doing it.  It is not just about paper and papyrus; it can begin a chain of unstoppable events including ethnic cleansing.

There is a long history of  Catholics  and Muslims burning books and indeed whole libraries have been destroyed in the past usually after invasions and by fanatics of opposing religions.  We have lost so much of our seminal cultural heritage and irreplaceable literature.  For instance,  the Library of Baghdad with its famous archives of translations  from Persian classics and Aristotle into Arabic.   The Library of Baghdad held so much of humanity’s early intellectual property such as Islamic science, mathematics, geography, medicine and chemistry, drawing on Pythagoras, Plato,  Hippocrates etc.  How much we  have all lost by acts of violence and sheer stupidity.

The Catholics burned ancient Maya Codices.  The Vatican held  (and still holds)  ‘Lists’ of books that they decided  the populace should not read,  and in the past have burned in bonfires (see… Islam, Christianity & The Vatican Library). In China,  Classics of Poetry and  History were burned by opposing dynasties.  The Nazis loved to burn books while destroying universities and libraries.   Sarajevo  was famous for its traditional religious diversity, with adherents of Catholicism, Judaism, Orthodoxy and Islam,  coexisting there for centuries.Due to this long and rich history of religious diversity and coexistence Sarajevo has often been called the “Jerusalem of Europe”.  However, during the Balkans war in the early 1990s,  the National Library of Sarajevo was destroyed.  What followed all of the above destruction is well documented; perhaps we need to remind ourselves of the old saying that those who ignore history are doomed to repeat it. 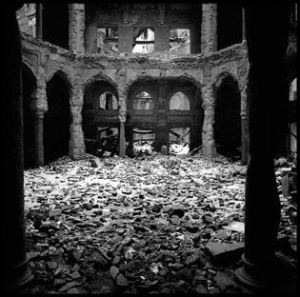 IN THE RUINS OF THE LAST LIBRARY

Afterwards
when all went silent;
after words turned ash,
the last remaining pillar fell
and mortar
crumbled into dust,
the aged librarian
mumbled verses from his dying books
turned skyward, cloud-gazed,
stumbled as he turned and left;
leaving only footprints in the sand
that once was kingdom, library:
that held the answers
we have lost.