In my blog post dated 2 July 2013 ‘How Catholic Dogma Aided Paedophile Priests’ I wrote about Chrissie and Anthony Foster’s book in which they describe how two of their daughters’ lives were destroyed when they were repeatedly raped from the age of five, by Catholic paedophile priest, Father Kevin O’Donnell. 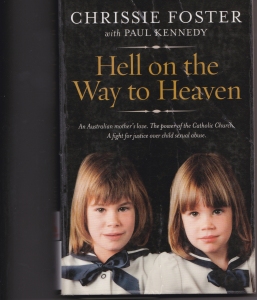 During the long battle to save their oldest daughter Emma, from more attempts at suicide by drug overdose and self-harm, she was admitted to one psychiatric unit / detox. clinic after another, over the years. Emma struggled, with some success, along with the loving help of her family, to overcome her addictions. It was a one-step-forward and a two-steps-back progress. Try as she might, Emma could not erase from her memory, what Father Kevin O’Donnell had done to her.

Emma was fast running out of psychiatric unit options because of her continual breaking of the units’ rules. However, one day in desperation, her mother found her a placement in a clinic run by the Catholic Church. Although she was hesitant about sending Emma there, she was comforted after being reassured that all the counsellors were professionals. But Emma had only been in the unit for a few days, when she phoned her mother and told her that a woman at her counselling sessions was a ‘practising Catholic and wore a cross’.  Emma was agitated and anxious. This woman was pressuring Emma to admit she was at fault for the abuse she was subjected to. Later that day, Mrs Foster rang the manager of the unit and explained her concerns about what Emma had told her. The manager stated that it wouldn’t have been a qualified counsellor and she had no idea who the woman was. She suggested Emma may have been speaking to a tea lady or cleaning staff.

A few months before she died at 26 years of age, from an overdose of her medication, Emma refused to see or talk to her mother. Chrissie Foster was hurt and bewildered. She was devoted to her daughter’s welfare and recovery, as was Mr Foster and their extended family. In the past, Emma had written many notes and diary entries, declaring how much she loves her family and how supportive of her they always are. But, she adds, her mother is the one she loves the most; she is always there for her.  That’s why Mrs Foster found it difficult to understand why Emma didn’t want to talk to her. She was hopeful that it meant Emma was trying to stand on her own two feet, and this could be a good turn of events.

Following Emma’s death, Mrs Foster had the heartbreaking task of packing up Emma’s belongings from her bedroom in the house she had loved, had decorated and furnished herself.  Loose sheets of paper were lying about all over the place. After collecting them up in a bundle, Mrs Foster sat reading the many notes Emma had jotted down in her neat hand writing.  A few of the diary notes covered her stay at the Catholic unit. She writes about the counselling sessions she attended and how traumatic they were because the counsellor was very critical and angry:  Why had she not run away? Why had she not told anyone about the abuse at the time? Why didn’t she call out?  Emma wrote: I told her I was five or six, he had all the power. Emma also wrote that she was made to feel it was her fault she had been abused. Anyone who has read Chrissie Foster’s book will know how those options would have been impossible for Emma given her age, the school environment in which the sexual abuse took place and her Catholic upbringing.  But most of all, they would have been impossible because Kevin O’Donnell was a paedophile with over 50 years experience. His victims describe him as an old man who was  frightening and angry. He continuously told them they were evil while he raped them.

Mrs Foster could not stop thinking about this ‘practising Catholic’ who was posing, unchallenged, as a psychiatric counsellor.   She believed no psychiatric unit in the 21st Century in Australia should be employing untrained counsellors. The woman obviously wouldn’t believe a priest was capable of sexually abusing children.  The ‘counsellor’ had intimated to a troubled Emma that she held priests in the highest esteem but despised the victims who claimed that priests had sexually assaulted them.

A distraught Mrs Foster phoned the Catholic Psychiatric Unit on a Sunday morning to enquire after a counsellor.  To her shock and horror, the helpful receptionist informed Mrs Foster that there was a nun on duty 24/7 to talk to patients.  So it was a nun who was employed as a professional counsellor at the unit and who was responsible for turning Emma against her mother. Emma had said to another person not long before her death, that the abuse was her mother’s fault, her own fault, and that the counsellor had angrily told her that Father O’Donnell had not raped her.

It becomes clear in Chrissie Foster’s book ‘Hell On The Way To Heaven’ how much Emma’s stay in the Catholic psychiatric unit affected and undermined her inner resolve to overcome her addictions and get her life back on track once again.  The years of addictions and self harm had taken their toll, but Emma was making progress, albeit slow. However, once she was coerced into severing ties with her family, and to rely completely on the unit for all her support,  she had come full circle; under the control of staff who preached Catholic dogma. Her fragile psychiatric condition could no longer put up a fight. She died alone in the house her parents had helped her buy with her share of the compensation money the Catholic Church had finally awarded to her and her family, after years of legal battles.

I know full well, from my time as an observant and devout Catholic child, the esteem and reverence in which most nuns hold priests. They too believe that priests are representatives of God himself upon this earth, and can do no wrong. Nuns are true brides of Christ.